Provincetown, MA: The Alden Gallery will present “Robert Morgan and Sean McCabe,” a two-person show of new work, opening on Friday, August 19, 2016, from 7 to 9 p.m., at the gallery’s exhibit space at 423 Commercial St. Drinks and refreshments will be served; the gallery is open to the public and free. The show will be on view through September 1.

San Francisco artist Robert Morgan fell in love with Provincetown many years ago, when he took workshops with Robert Henry, Jim Peters, Gregory Amenoff, and others at the Fine Arts Work Center. “Most of my oils and watercolors deal with men in relationship to the outdoors and each other, often at beaches,” says Morgan, who can often be found photographing subjects around town in late summer. “The seductive combination of sun, sea, sand, and men’s bodies is one I long to preserve in paint.” The Alden Gallery welcomes him back for his ninth show in Provincetown. 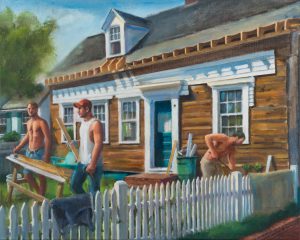 Provincetown artist Sean McCabe is making his first appearance at the Alden Gallery this season. “My paintings are a semi-abstract, mixed-media interpretation of street scenes and locations,” McCabe says. “I use color and line to express both tranquility and kinetic energy. These scenes are told through small hints of recognizable elements, but often are purposefully vague as to allow a certain degree of personal association. Many of the works are composed through gross shape and primitive drawing to serve less as a visual representation than as a captured impression or feeling.”