Provincetown, MA: The Alden Gallery will present “Mike Wright and Paul Kelly,” a two-person show of new work, opening on Friday, July 10, 2015, from 7 to 9 p.m., at the gallery’s exhibit space at 423 Commercial St. Drinks and refreshments will be served; the gallery is open to the public and free. The exhibit will be on view through July 23. 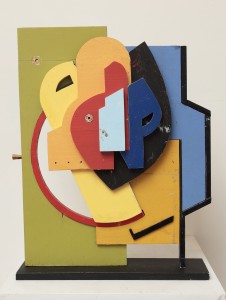 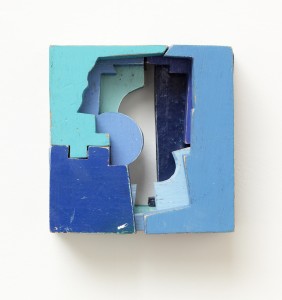 Provincetown sculptor Mike Wright, who creates abstract assemblages of found painted wood, has been on a roll since she was awarded a prestigious Pollock-Krasner Foundation Grant last year. In the spring, the Cape Cod Museum of Art presented “re-MAKE,” a large solo exhibition of her work to date; she was featured in the book “Contemporary Cape Cod Artists: On Abstraction,” by Deborah Forman; she was picked for a juried show at the Provincetown Art Association and Museum and curated another exhibit of historic work, “Moderns vs. Regulars,” at PAAM; and her 2014 show at the Alden Gallery, featuring wood from Robert Motherwell’s local studio, nearly sold out. For her new show at the Alden, Wright is presenting assemblages inspired by Blanche Lazzell paintings and a new “Looking Into” series of multi-layered cubes. “The point of using found wood is that, as debris, it seems unpromising,” Wright says. “But that lack of promise is also its appeal—the peeling paint, the color scrubbed by salty waves, sand or human use. My principal parameter is that the wood must be found in Provincetown. The second is not to paint that wood, because its patina is impossible to duplicate.” 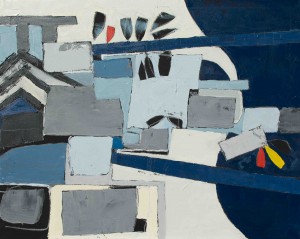 Local artist Paul Kelly began his “Above It” series of oil paintings based on the bird’s-eye view of Provincetown provided by Google Earth. In his new show at the Alden Gallery, Kelly continues to explore the edges of abstraction in the “Above It” series, distilling his use of color and morphing the lines and perspectives. Playing with our sense of landscape comes naturally to Kelly, who studied architecture at the Rhode Island School of Design and fine arts at Syracuse University, and set up his studio in Provincetown in the very house and gardens where the legendary Henry Hensche once taught his students. Despite this historical setting, Kelly’s “preference for clean-edged shapes and a muted palette places his art apart from the jewel tones and loose brush strokes of what today is considered the Cape Impressionist tradition,” writes Susan Rand Brown in the Provincetown Banner. 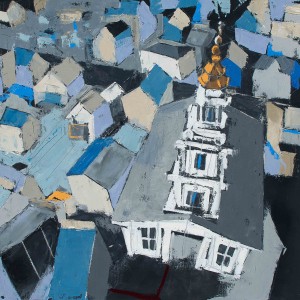