The Alden Gallery will present “Catherine McCarthy and Alice Denison,” a two-person show of new work, opening on Friday, September 4, 2015, from 7 to 9 p.m., at the gallery’s exhibit space at 423 Commercial St. Drinks and refreshments will be served; the gallery is open to the public and free. The exhibit will be on view through September 17. 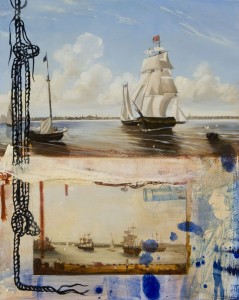 Catherine McCarthy is an award-winning Boston-based artist with an extensive history of exhibiting nationally, including four solo museum shows: at the Museum of Fine Arts, Boston, where her work is part of the permanent collection; the Kemper Museum of Contemporary Art, in Kansas City; the Knoxville Museum of Art; and the San Jose Museum of Art. “She has always been fearless in her experimentation with different paint applications on one canvas,” writes Boston Globe art critic Cate McQuaid. For her fourth Alden Gallery show, McCarthy, whose grandmother lived in Dennisport, explored the maritime history of the Cape. “The starting point for this new group of paintings was looking at work by two New England painters,” McCarthy says, “Rockwell Kent, 20th-century, and William Bradford, 19th-century, both with a penchant for depicting merchant and whaling activity. This new work focuses on the nautical experience and how it helped define our collective ‘New World’ culture and consciousness. I’m intrigued by the intersection of the unspoiled, virgin and pure with commerce, industry and history—paradise facing off with parasitism.” 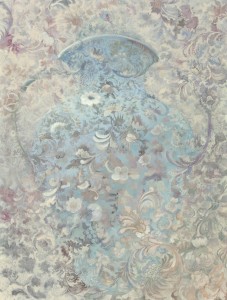 Alice Denison is calling her new show at the Alden Gallery, where she has been showing since it opened in 2007, “More Meta,” a play on metaphor and the contemporary sense of the term meta. Denison has always been obsessed in her paintings with the way we imbue decorative objects, particularly flowers, with meaning, and recently, she has been shrouding urns and vessels in a web of floral patterns. “Each piece begins,” Denison says, “with a grid, a drawing and a raised pattern in stenciled acrylic paste. Color is washed on in acrylic. From there, I work in free form, doodling in patterns in thin oil paint with tiny brushes. Once I’ve covered the surface, I start again, recoating the first layer here, layering on another pattern there, until there is play between the form of the pitcher and the ground. The large works come together bit by bit over months. The submerging and emerging pitcher is a metaphor for our own place, both apart from and a part of the world. Influences on the work include patterned wallpaper, fabric, and ceramics; Chinese Song dynasty paintings; Dutch 17th-century and French 18th-century still-life painting; and the pattern painters of the 1970s.”