The Alden Gallery will present “Kevin Cyr, Robert Morgan and Raúl Gonzalez III,” a three-person show of new work, opening on Friday, August 21, 2015, from 7 to 9 p.m., at the gallery’s exhibit space at 423 Commercial St. Drinks and refreshments will be served; the gallery is open to the public and free. The exhibit will be on view through September 3. 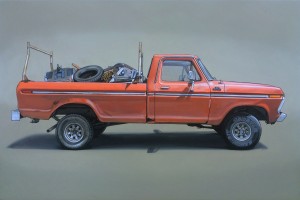 To find the subjects for his work, Kevin Cyr searches the streets and byways of cities and towns here and abroad, photographing trucks and old cars and vans and campers. The more neglected and junky and sprayed with graffiti they are the better. He then returns to his studio (in Portland, Maine) and transforms these vehicles into regal, hyper-real oil portraits, every blemish faithfully reproduced, set against an invented solid-color backdrop. “Painting these objects gives me a chance to document a time and place, and to make still a part of the ever-changing environment,” Cyr says. “Live Work Play” is what he’s calling his newest show at the Alden Gallery. 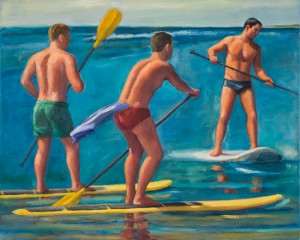 San Francisco artist Robert Morgan fell in love with Provincetown many years ago, when he took workshops with Robert Henry, Jim Peters, Gregory Amenoff, and others at the Fine Arts Work Center. “Most of my oils and watercolors deal with men in relationship to the outdoors and each other, often at beaches,” says Morgan, who can often be found photographing subjects around town in August. “The seductive combination of sun, sea, sand, and men’s bodies is one I long to preserve in paint.” The Alden Gallery welcomes him back for an eighth show in Provincetown. 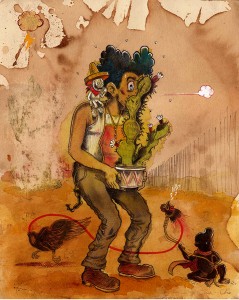 Boston-based artist Raúl Gonzalez III, whose work has been showing at the Alden Gallery since 2013, is presenting new mixed-media work that, he says, “explores issues of violence, hyper-masculinity, and my own cultural background, and reflects my interests in the human figure, early American cartooning, and Japanese Samurai prints. The images are set in the summer, and are centered on desert plants, religious icons, and male figures of authority, such as those fantastical masked Mexican wrestlers.