The Alden Gallery will present “Joerg Dressler and Heather Toland,” a two-person show of new work, opening on Friday, August 7, 2015, from 7 to 9 p.m., at the gallery’s exhibit space at 423 Commercial St. Drinks and refreshments will be served; the gallery is open to the public and free. The exhibit will be on view through August 20. 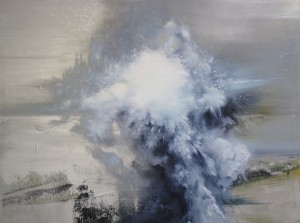 Joerg Dressler’s work is driven by nature and how we perceive it. When he is in the studio, he paints solely from memory. As a result, disjointed experiences of the seen and learned are re-assembled, creating a reality of their own. Joerg’s evocative, vigorous paintings derive from a sincere dialogue between the representational and the abstract, the conceptual consciousness and pure spontaneity. Though his vocabulary is drawn from a cross-section of history—Renaissance, Mannerism, Impressionism, Abstract Expressionism, Pop Art, Postmodernism, graphic design, and photography—his work emerges as his own distinctive visual communication. With his series, “Entropy,” Joerg has been exploring a wide spectrum of natural imagery. “The higher the entropy/disorder,” he says, “the greater the challenge to not resolve into repetitive patterns and static forms, but instead to paint shapes that remain fluid and seemingly fleeting.” For his new Alden Gallery show, Joerg has added elements of line drawing to the “Entropy” series oil-on-canvas paintings. 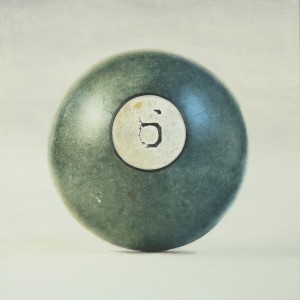 For her first exhibit at the Alden Gallery, New Hampshire-based artist Heather Toland is completing a series of hyper-real close-up oil portraits of individual billiard balls from an old junked set. “My paintings focus on details of the antediluvian,” Heather says, “expounding the distinctive textures and colors of surfaces long ago discarded. What was once the piece in a game, expended and discarded, becomes the subject in a portrait, as an anthropological artifact. Each missing chip of clay etches a story, like the lines and leathery folds of an old man’s face.” A 2009 graduate of the New Hampshire Institute of Arts, Heather has shown since then in galleries throughout New England.