Provincetown, MA: The Alden Gallery will present a show of new work by Kevin Cyr and Paul Kelly opening on Friday, July 14, 2017, from 7 to 9 p.m., at the gallery’s exhibit space at 423 Commercial St. Drinks and refreshments will be served; the gallery is open to the public and free. The show will be on view through July 27.

Kevin Cyr’s paintings result from the artist’s ongoing fascination with the vehicles he frequently saw in his childhood. “I have always been interested in painting vehicles and scenes that have defined the evolution of the American landscape,” he explains. The subjects of his paintings have included commercial vehicles, RVs, vans, camper bicycles, and VW buses, all in a state of disrepair and marked by graffiti and rust. He puts his vehicles on solid, brightly colored backgrounds, which he likens to a set-up for portraiture. Common themes in his work include mobility, sustainability, mortality and consumer culture. 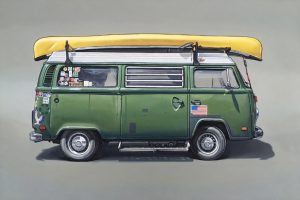 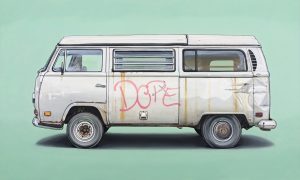 “I am enjoying the process of evolving at my work,” Paul Kelly says. “My background in architecture and my love of Provincetown images provide inspiration for sketchbooks full of soft pencil drawings. In my paintings, I have tried to capture some of the spontaneity of my sketchbook drawings. Artists such as Thiebaud, Hopper, and Diebenkorn, as well as instructors at the Provincetown Art Association and Museum (Megan Hinton, Mary Giammarino, Karen Cappotto, and John Clayton) and at the Fine Arts Work Center (Joel Janowitz) have influenced the way I look at my art.” 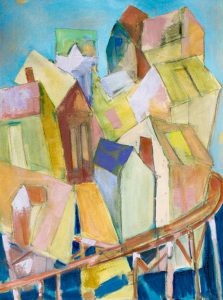